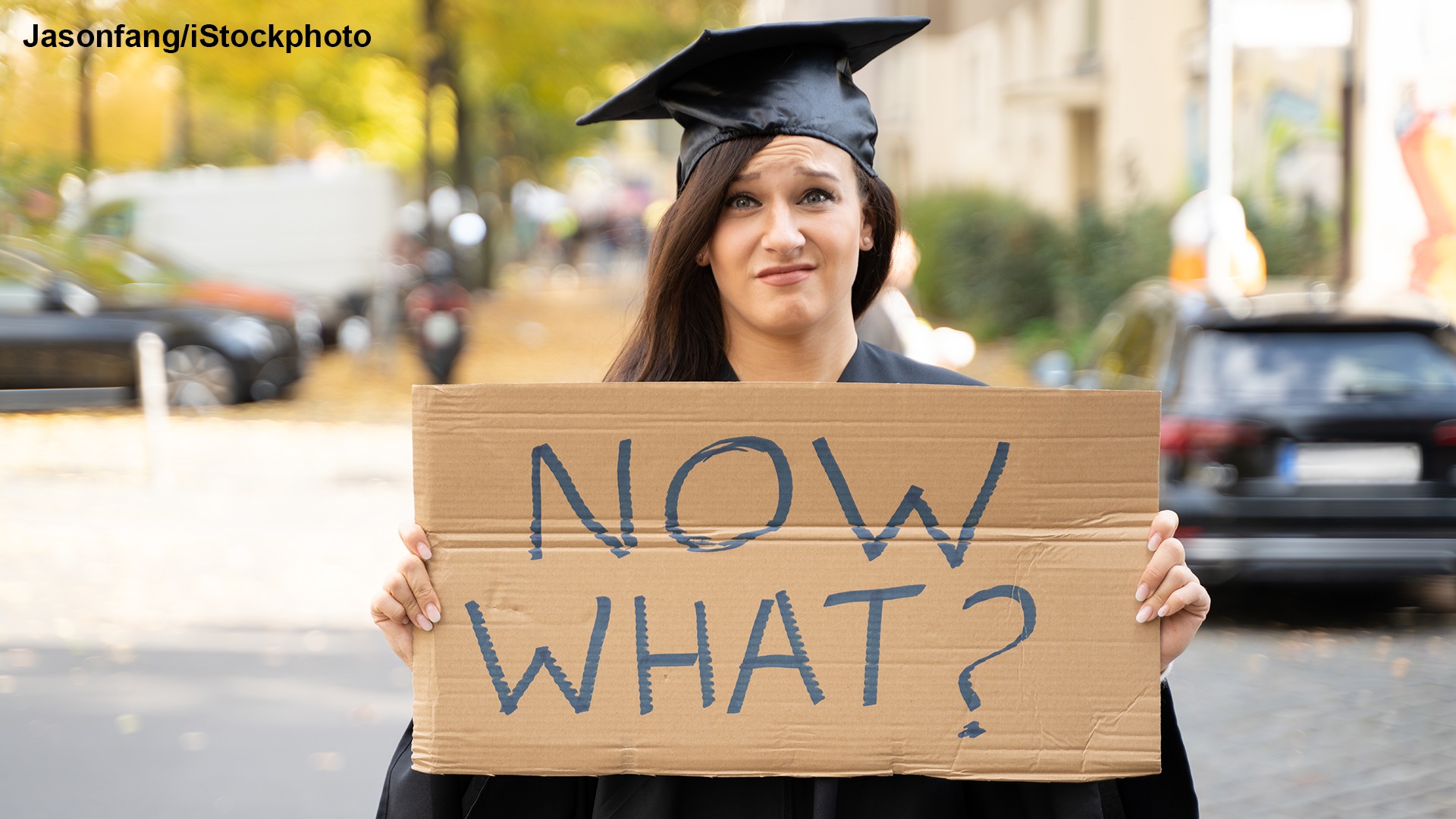 Trouble in Science
In Lindau, Nobel Laureates are free to talk about whatever they please. Naturally, this entails a big deal of first class science. However, it would be unfair to deny that there is the occasional hint of humour as well. And then, of course, from time to time there are talks which do not touch upon science at all… or at least not upon science that actually works. In this topic cluster, we wish to present the reader with some of these funny, curious and controversial moments. Although particular cases should be considered only with a sufficiently critical mind-set, we believe that this collection of scenes represents an integral part of the Lindau spirit. After all, where else do you find such a staggering number of scientists who already have achieved the highest of honours and can hence talk their mind in the most relaxed and unbiased way?

On the Lindau Stage
Our little odyssey begins with the German mathematician and physicist Max Born, who received a Nobel Prize in Physics for his work in the field of quantum mechanics. In 1959, Born used the first few minutes of his talk in Lindau to tell the story of what must have been the most complicated publication procedure in the history of science. If you think that the peer-review of your research papers is a lengthy, nagging and unnecessary procedure altogether, first listen to what Born experienced with his book on optics. You might just change your mind. 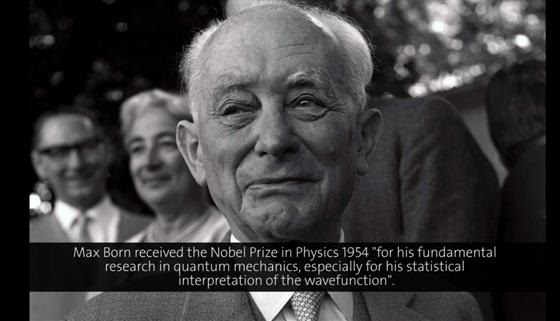 Born was not the only one who faced adversity with a good sense of humour. In 1964, the German chemist and discoverer of the nuclear fission of uranium, Otto Hahn, shared with the Lindau audience how he heard about a “letter of recommendation” that was sent to his host professor Ernest Rutherford in Canada. It turned out to be very unfavourable indeed: 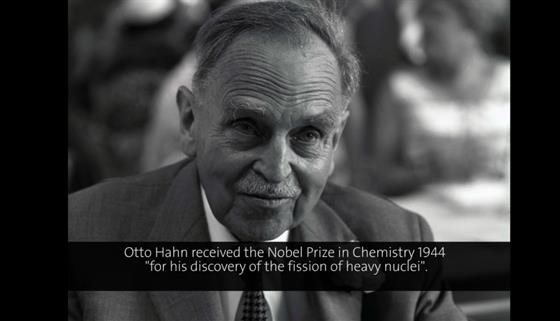 Now, let’s suppose you are a scientist and you just came up with an intriguing new theory. The only problem being, that your subject matter is theoretical particle physics, which, despite its fundamental relevance, probably won’t trigger outcries of excitement at the next cocktail reception. Or a Lindau lecture. So what do you do to honour your cause and keep the audience awake at the same time? You might as well mix in something that everybody can relate to. And you might as well do that by tapping the world of fairy tales. Listen to how Werner Heisenberg, the namesake of the Heisenberg uncertainty principle, explained the nature of the so-called “Spurion”, a fictitious, auxiliary field in quantum field theory, to the audience of the 1962 Lindau meeting: 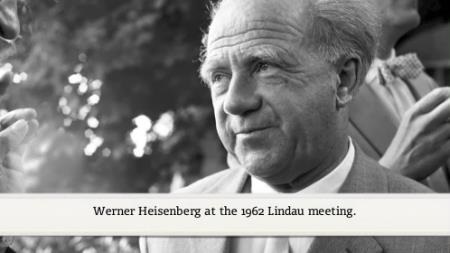 Let’s travel onward in time for about 7 years. You are still a scientist. Your new field of expertise, cancerous metabolism, is of immediate importance to the general public. Again, you have a brilliant theory. And of course, you are eager to get it out. Indeed, this time, it should go down like butter. There is only a slight problem. Despite the brilliance of your theory, you are pretty sure that it is actually too good to be entirely true. What to do? The Hungarian Albert Szent-Györgyi, Nobel Laureate in Physiology or Medicine 1937 and discoverer of vitamin C, gave the answer during the 1969 Lindau meeting in Medicine: you just present it with a smile! 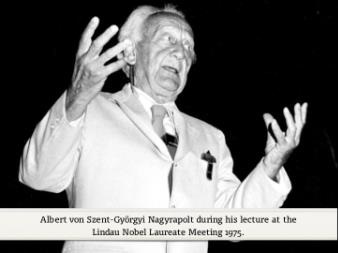 1961 Chemistry Laureate Melvin Calvin, who showed how plants may convert carbon dioxide into biomass, must have done something similar in his 1974 Lindau talk (although, due to the lack of video recordings, we cannot actually confirm him smiling). Like Szent-Györgyi, Calvin pointed out that being wrong and knowing about it does not have to be a disadvantage: 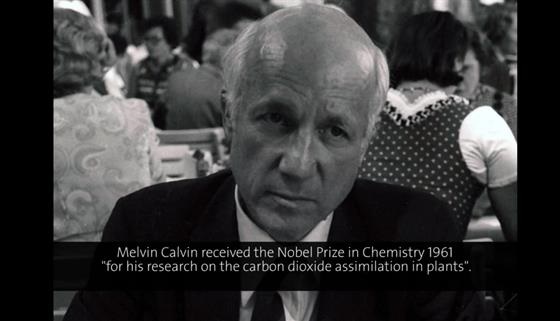 Still, what Szent-Gyorgyi and Calvin touched upon with irony and charm can quite easily turn into something completely negative: “bad science”. The latter may manifest in several forms... it may be intended, or unintended... significant, or just irrelevant... a trivial offense or severe fraud. At the 2012 Lindau Meeting, 1973 Physics Laureate Ivar Giaever took some time and good humour to discuss the different manifestations of “bad science” in the context of the on-going discussion around climate change: 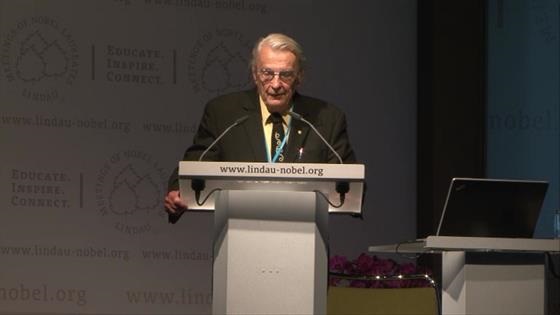 One of the important points made by Giaever is that scientists may quite easily become victims of their own convictions and enthusiasm, thus losing objectivity. In the field of medicine this was acknowledged some time ago. If, for example, a new drug is tested on patients today, it is mandatory to conduct a double-blind study. In such studies, neither the patient nor the treating physician know, whether the administered pills contain an actual drug or are just a placebo. In any other scenario, the patient might be - consciously or subconsciously - tricked into experiencing the well-known “placebo effect” - an improvement of his symptoms based solely on the belief in the applied treatment.

But let’s go back to Giaever’s talk, which is in fact a truly remarkable one. As of February 2013, this particular lecture is the most frequently viewed item in the Mediatheque of the Lindau Nobel Laureate Meetings. And it is not very likely that this situation will change anytime soon. The reasons are certainly not Giaever’s comments on the manifestations of “bad science” - but the message he delivered a couple of minutes later. A message, which is perfectly suited to stir up attention:

It is intriguing to know, that Giaever’s talk followed directly upon another talk on the same subject by 1995 Chemistry Laureate Mario Molina, who had received his share of the Prize for his work on atmospheric chemistry. While Giaever attacked “climate change” by every trick in the book, calling it a religion and pseudo-science, MIT-professor Molina took the completely opposite stance: 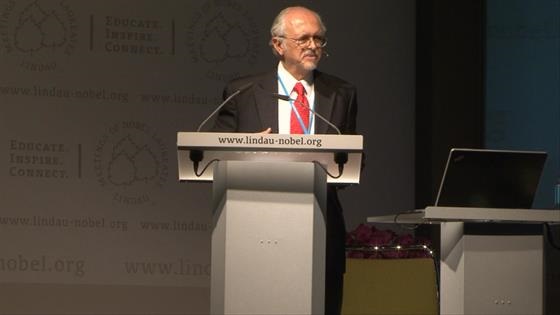 Mario Molina (2012) - The Science and Policy of Climate Change

As of February 2013, Molina’s talk is the second most viewed item in the Mediatheque. Taken together, both talks are a rare occasion of uncalled confrontation on the Lindau stage... we will leave it to the reader to make up his own mind about whom to believe.

Remaining in the realm of controversial lectures for a little longer, let’s have a look at Luc Montagnier’s 2010 Lindau Lecture. Montagnier had been awarded a share of a 2008 Nobel Prize in Physiology or Medicine for his contributions to the discovery of HIV. In Lindau, he talked about new results he obtained on a phenomenon which is considered by scientists to be highly controversial, to say the least [1]. Montagnier proposed that DNA, when dissolved, induces structural changes in water, which lead to measurable electromagnetic signals. These signals are claimed to persist, even if the water is diluted so highly, that no DNA molecules are present anymore: 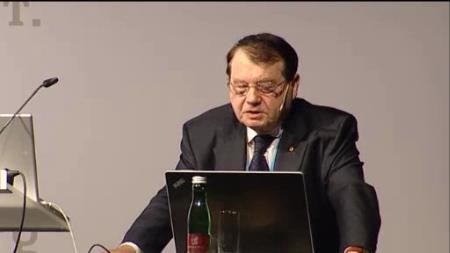 Although Montagnier’s results received quite some attention from homeopaths, who similarly claim to achieve beneficial effects with extremely diluted active agents, the response of the scientific community was negative. Some even described Montagnier’s latest work as what Ivar Giaever had outlined as “pathological science” in the snipped shown above [2]. In any case, Montagnier’s results have not been confirmed by other laboratories so far. Unable to obtain funding for his work in France, he is now heading an institute at the Chinese Jiaotong University in Shanghai [1].

While DNA restructuring water remains a shaky concept, some things can be considered certain - with a clear conscience. For example, that a Nobel Prize changes a scientist's life - and not just by a small margin. Many Nobel Laureates have commented on these changes and many have bemoaned the necessity to talk about their Nobel Prize research again and again. To avoid the latter, some Laureates have taken rather creative approaches.

Amongst them, Harold (“Harry”) Kroto, one of the discoverers of the C60 Buckminsterfullerene, would probably earn the award for the most refreshing way of presenting. His technique relies on a quick succession of, sometimes loosely connected, images, which are, in a most creative fashion, gathered from the spheres of history, arts, science, society etc. This brings about a relaxed and - at the same time - enriched and intense atmosphere, which is highly appreciated by the Lindau audiences. Let’s have a little taste: 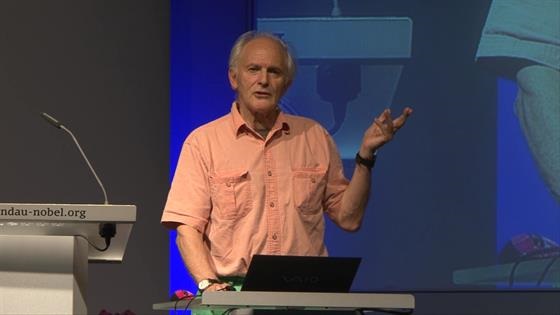 And then, of course, there is Peter Agre’s 2009 talk. This lecture, which Agre himself called “special” is probably the least scientific ever given by a Laureate on the Lindau stage. Agre, who is today leading the Johns Hopkins Malaria Research Institute in Baltimore, had received a 2003 Nobel Prize in Chemistry for his work on channels in cell membranes. In 2009, however, he reported on a canoeing trip in the arctic. And some issues relating to food preparation: 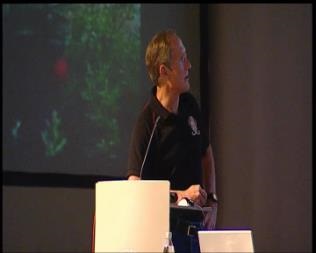 Peter Agre (2009) - Canoeing in the Arctic, a Scientist´s Perspective

Beyond the Lindau Stage
What Agre quite clearly did not have in the Arctic was a decent wine. A Laureate, who might have been able to help him out there is Brian Schmidt, who received a share of a 2011 Nobel Prize in Physics for proving the accelerating expansion of the universe. And since a glass of wine with Schmidt seems to be an ideal means to put all the “Trouble in Science” discussed here into the right context, let us fast travel from Lindau to Australia and see what he has in store: 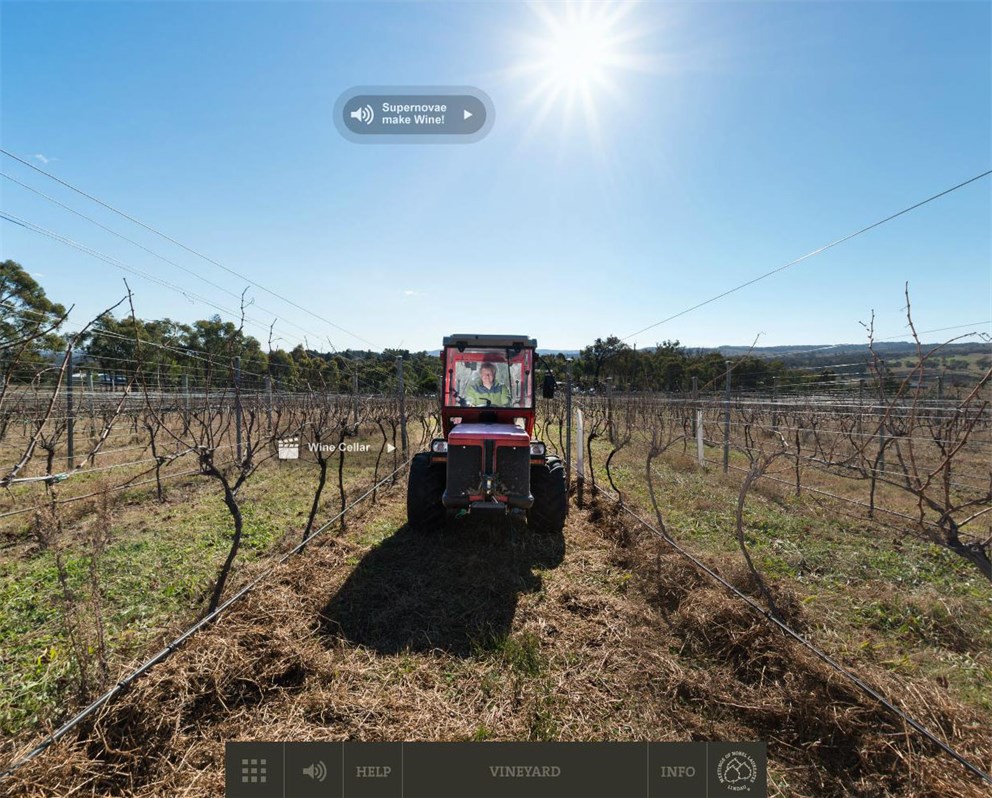 Last but not least, what goes better with wine than gazing at a distinguished collection of sophisticated paintings? Fortunately, the group of Martin Chalfie, recipient of a share of the 2008 Nobel Prize in Chemistry for his work on the green fluorescent protein, is in rich supply of high class art and not reluctant to share it. So, from Australia to New York it is: 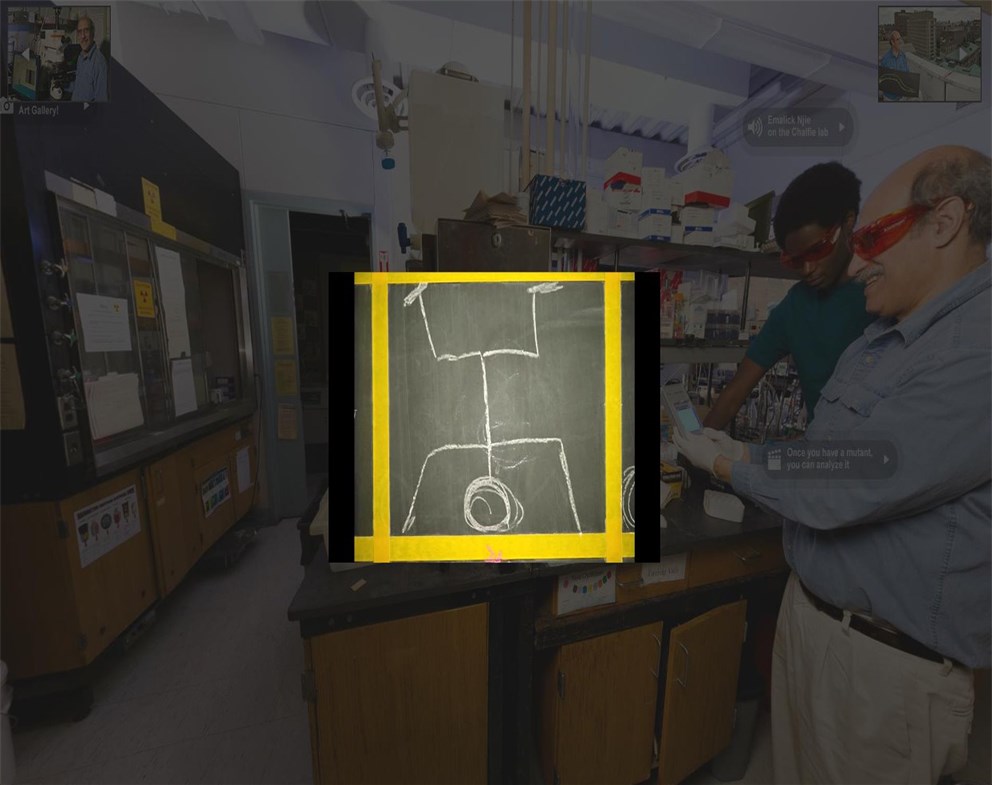 With the Chalfie group art, our tour through some of the more unusual of the Lindau meetings comes to an end. We hope you enjoyed this rather colourful mix of snippets. While they might not broaden our scientific knowledge in the narrow sense of the word, they do have the potential to remind us of a few things we might be inclined to forget at times: science can be controversial, even on the highest level. A good dose of humour does not hurt. And: at the end of the day, even Nobel Laureates are only human.