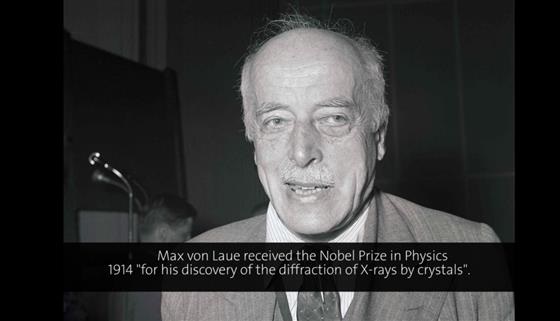 Measured in the year of his Nobel Prize (in Physics 1914), Max von Laue is the most historic Nobel Laureate that ever lectured at one of the Lindau Meetings. Next in line measured in this way is Lawrence Bragg, who received the Nobel Prize in Physics 1915 together with his father. The Nobel Archives disclose that the Nobel Committee for Physics first thought of awarding von Laue together only with the older Bragg. But a member of the Committee studied the case carefully and came to the conclusion that one could not leave the younger Bragg out. Today the awarding of these three scientists with Nobel Prizes would probably take place the following way: Max von Laue would receive half of the money and the two Braggs would share the other half of the money. But the number of scientists in the pipe-line was not that large at this time and so the Committee and the Academy instead decided to use the Nobel Prizes from two consecutive years (1914 and 1915) to award the three scientists for their discoveries and to announce all the awards in 1915. Because of WWI, there was no celebration in Stockholm. Instead there was an extra celebration in June 1920, in which Max von Laue participated. In his Lindau lecture, von Laue describes part of the history leading up to the discovery of X-ray diffraction in crystals. In his story, the theoretical physicist Arnold Sommerfeld, plays an important rôle. He was at first sceptical to von Laue’s idea of passing X-rays through crystals to look for interference effects, but eventually gave his OK. The experiment was performed by W. Friedrich and P. Knipping, and the rest is history. Let me make two comments on Arnold Sommerfeld: He published a set of very useful textbooks that I studied and used early in my academic career. And he holds the record for having been nominated most times (80) for the Nobel Prize in Physics 1901-1950 without ever receiving it!Anders Bárány