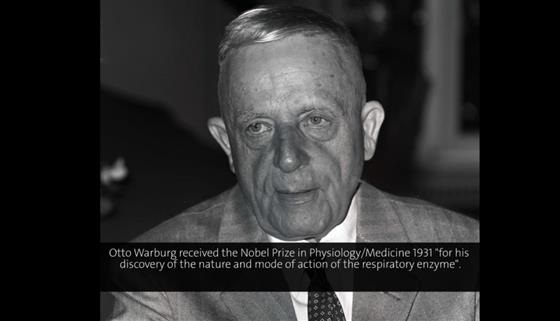 In 1931, Warburg himself received the unshared Nobel Prize in Physiology or Medicine "for his discovery of the nature and mode of action of the respiratory enzyme" [2]. This “respiratory enzyme”, which is actually a complex of several enzymes referred to as cytochrome c oxidase, catalyzes the reductive conversion of oxygen (O2) to water (H2O) in the frame of cellular respiration. With its discovery Warburg had accomplished nothing less than “the first demonstration of an effective catalyst, a ferment, in the living organism” [3]. This feat, however, is only a part of his scientific legacy.

By virtue of his work on the metabolism of cancerous cells Warburg furthermore became the namesake of the “Warburg effect”. This term refers to Warburg’s observation that all cancer cells employ lactic acid fermentation to obtain energy, even if oxygen supply is sufficient to allow for the more energy-efficient respiration. In most non-cancerous cells, on the other hand, fermentation will not occur if oxygen supply is sufficient.

In the present talk, Warburg attempts to expand the implications of the “Warburg effect” to a general theory for the development of cancer. He suggests that cells turn into cancer cells by switching from respiration to fermentation. This could happen if the enzymatic machinery required for respiration is damaged or respiration is not possible due to a lack of oxygen, for instance. In fact, for Warburg the onset of fermentation on the cellular level is the ultimate cause of cancer (“die letzte Ursache”). All other causes - be they lifestyle factors, genetic predisposition or exposure to chemicals and viruses - are merely distant causes (“entfernte Ursachen”) ultimately all leading to fermentation and thus cancer.

Towards the end of the talk, Warburg’s considerations culminate in the statement that cancer could in fact largely be prevented. To do so, he suggests to strengthen the enzymatic machinery responsible for cellular respiration, thus making the switch to fermentation - and cancer - less likely. This strengthening could easily be achieved by supplementing food with the micronutrients (i.e. essential elements, vitamins and co-factors) required for cellular respiration, so Warburg.

Today we know that his idea is - unfortunately - too good to be true. While the validity of the Warburg effect remains unchallenged, several assumptions sustaining Warburg’s cancer theory have been proven wrong. Most importantly, it is now known that there is no actual switch from respiration to fermentation at the onset of cancer. Cancer cells can rather conduct fermentation and respiration at the same time [1]. This allows them to obtain additional energy sustaining their excessive growth. Damage to the cellular respiratory system is thus not likely to be a cause of cancer. By the same reasoning, a strengthening of the respiratory system by supplementation of micronutrients is regrettably not a promising method of prevention.

Nonetheless, a healthy lifestyle and good micronutrient status have their benefits, as exemplified by Warburg himself. In his late life, he adopted a “personal cancer-preventive lifestyle” which consisted of moderate exercise and a diet of fresh, home-grown vegetables [1]. Warburg, who witnessed two World Wars and fought in one of them, reached the age of 87.