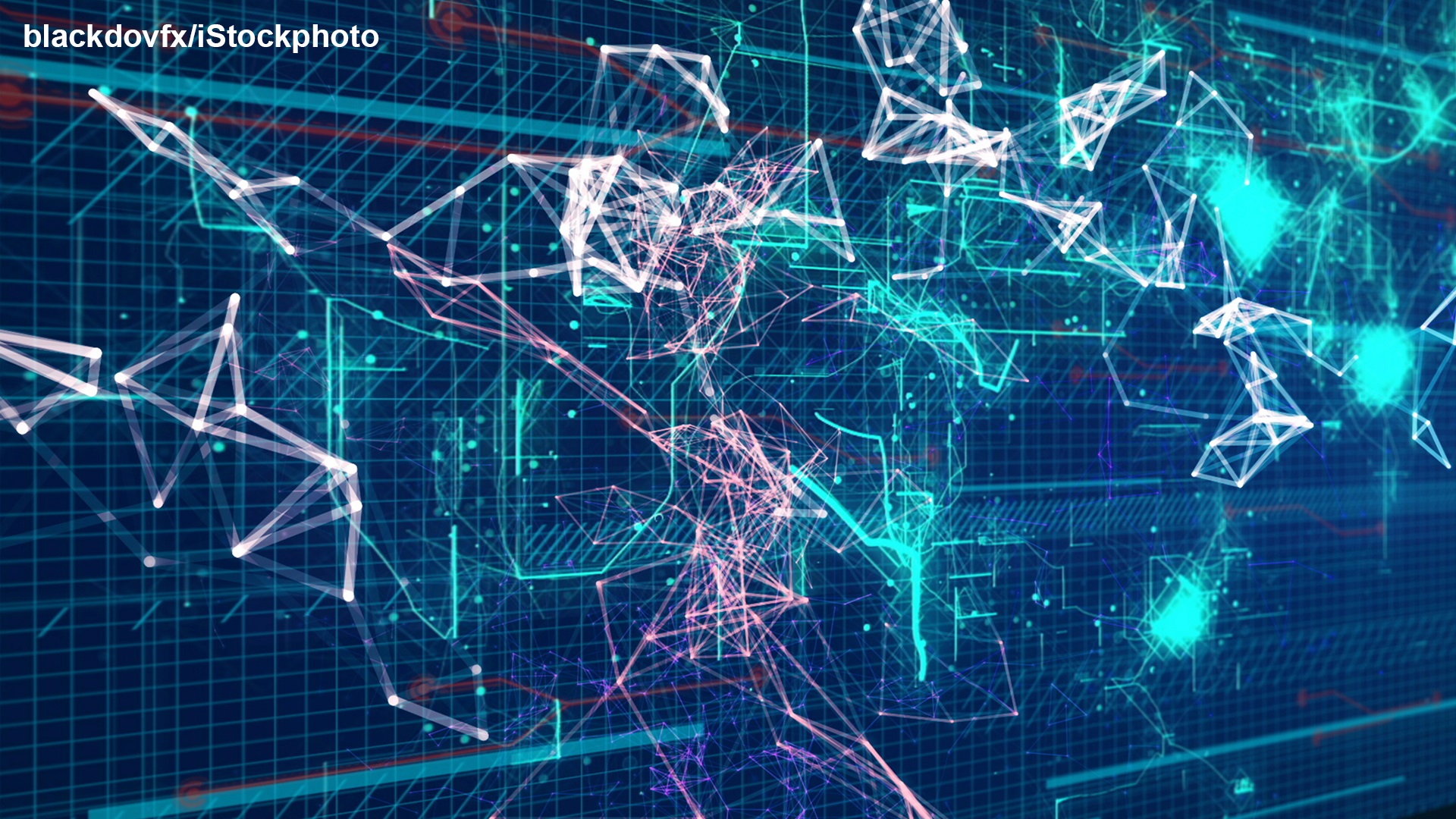 The global financial crisis, that began to manifest itself in July of 2007, emerged as a liquidity crisis, which in turn can be traced back to the U.S. subprime housing market. When interest rates for loans rose between 2004 and 2006 and the prices of houses began to decline in 2007, failures in the repayment of subprime mortgage loans as well as failures in the repayment of subprime mortgage-backed debts and other securities heavily increased. Major financial institutions, that had borrowed or invested in mortgage-backed securities of non-depository finance companies, were forced to declare bankruptcy or were taken over by other banks. The emergence of the global financial crisis was also the result of the doubtful use of high-risk off-balance sheet instruments with zero liquidity and uncertain value on the side of non-depository financial institutions. Mortgage-backed securities and collateralized debt obligations (CDO), which commercial banks traded to investors to distribute credit risk, but which turned out to be illiquid for most of the part, heavily accelerated in the year before the financial crisis surfaced. By contagion, the housing market downturn and subsequent financial market crisis have also affected the broader U.S. real economy. Due to the growing integration of financial markets and industries during the past 20 years, the crisis spread to Europe with dramatic slowdowns occurring across Europe and with the recession widening into a global problem. Some of the factors that led to the financial crisis in the U.S. – high-risk, non-banking mortgage loans, low interest rates, aggressive (subprime) credit expansion, ignoring of the credit risks of borrowers – created similar problems in Europe. The reasons causing the economic crisis within the Eurozone vary from country to country, though. While some European countries got into debt without any connection to the financial system, others tried to rescue their highly indebted banking system: Greek fiscal crisis refers to huge budget deficits due to excessive government over-spending, whereas Ireland’s and Spain’s economic crises go back to residential real estate bubbles, based on massive over-production of dwellings. In the case of Ireland, six main domestic financial institutions financed a property bubble that lead to the subsequent collapse of the domestic economy. Ireland was the first country to secure an International Monetary Fund-EU bailout package through the European Financial Stability Fund (EFSF), the European Financial Stability Mechanism (ESM) and the International Monetary Fund (IMF). The purpose of the IMF-EU bailout package was to spur the Irish economy and to restore a properly functioning Irish banking system.

In the new, globalized world of closely interdependent economies, the U.S. crisis affected almost every part of the world – in fact, the global financial crisis highlighted the complex international linkages between financial markets and between the U.S. and European economies. Professor Martin Hellwig, who opened the panel discussion “From Financial Crisis to Debt Crisis– Financial Markets, Monetary Policy and Public Debt” of the 2011 Lindau meeting on Economic Sciences, stressed the fatal global interdependencies of banks and governments as a key problem when analyzing and validating the global financial crisis. It is the worldwide entanglement – U.S., Irish or Spanish banks having funded a bubble with German or French banks having funded U.S., Irish or Spanish banks or sovereign debtors – which makes it difficult to thoroughly grasp the crisis. 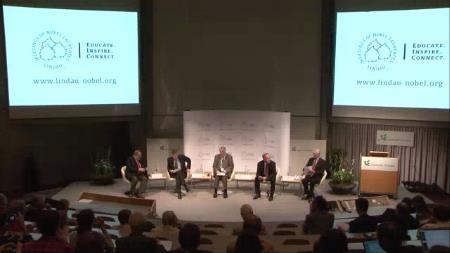 Leading economists, analyzing the causes of the global debt crisis, refer to the financial industry as a key factor liable for fundamentally endangering the monetary union. Real estate bubbles such as the ones in the U.S., Spain or Ireland could not have formed without the mismanagement of local banks. In his panel statement at the 2011 Lindau meeting on Economic Sciences, financial economist and recipient of the Sveriges Riksbank Prize, Myron S. Scholes, focuses on the banking sector as he advocates more market discipline and bank transparency to prevent excessive exuberance. Financial institutions, as Scholes argues, should provide trustworthy balance sheets and income statements that inform investors and regulators about the value of their assets and risk positions. In fact, the global financial crisis might as well be conceived as a securitization crisis. Investment banks and hedge funds, that were able to obscure their leverage levels from bond holders and regulators through the use of complex, off-balance sheet securitizations, played a crucial role in the formation of the housing bubbles. Provided with credible estimates of the value of a financial institution’s assets, investors would be able to make better capital allocation decisions that in turn would lead to improved macroeconomic outcomes over the long-run.

Aside from claiming more discipline in the private and banking sector, German Federal President Christian Wulff in his opening address at the 2011 Lindau meeting on Economic Sciences underscores the fiscal self-discipline of sovereign governments. With respect to Europe, Wulff points to the problem of EU member states violating massively the stability criteria established in the Maastricht Treaty. The stipulated ceiling of 60% for public debt was transgressed in 2010 by more than half of all EU member states, including Germany. The stipulations formulated in the Stability and Growth Pact (SGP) should be strictly enforced and practiced by the Eurozone governments and not be just mere formula. 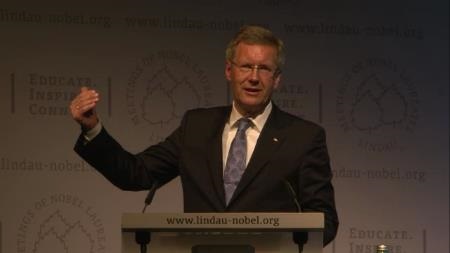 In methodological terms, economist Joseph Stiglitz, at the 2011 Lindau meeting on Economic Sciences, holds standard macroeconomic models liable for the creation of economic bubbles. Stiglitz, who received the Sveriges Riksbank Prize in 2001, questions the efficiency of standard macroeconomic models that failed to foresee the global financial crisis – in fact the financial crisis itself, as he notes, is a good illustration of the Standard Models’ inefficiency. In his 2011 lecture “Imagining an Economics that Works: Crisis, Contagion and the Need for a New Paradigm”, Stiglitz states that monetary authorities allowed housing bubbles to grow, partly because the Standard Models said that there could be no bubbles affecting markets on large-scale levels. Calculations based on the Standard Models, including risk diversification, foresaw that the breaking of a bubble in the U.S. subprime mortgage market would be a too small perturbation to have any global macroeconomic effects. 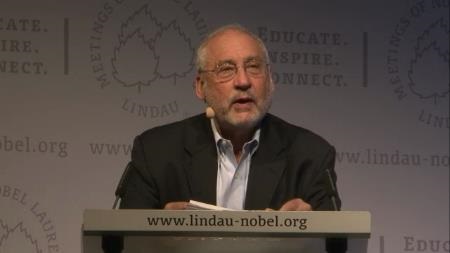 Joseph Stiglitz (2011) - Imagining an Economics that Works: Crisis, Contagion and the Need for a New Paradigm

Capital market imperfections, leading up to the economic crisis, were falsely assumed as exogenous shocks, not as endogenously generated. In fact, markets are massively inefficient on microeconomic levels, as Stiglitz also states in his 2008 lecture “The Global Financial Crisis: Lessons for Policy and Implications for Economic Theory”, so the crisis should be analyzed as a microeconomic failure that in turn is leading to a macroeconomic failure. Furthermore, Stiglitz emphasizes the importance of growing inequality as a major of cause of the global financial crisis. Growing inequality diminished aggregate demand that in turn was covered up by the Central Bankers as they created housing bubbles.

Time for a World Currency?
In order to avoid great systemic crisis in a global context, 1999 Economics Laureate Robert Mundell in his lecture “The Case for a World Currency” at the 2004 Lindau meeting on Economic Sciences, argues for an international monetary system anchored to a stable global currency unit. Mundell considers constant revaluations of major currencies like the U.S. dollar and the euro as having destabilizing effects on the economic and financial stability worldwide. He calls for a multiple-currency monetary union with the U. S. dollar, the euro, and the yen areas (DEY) as the anchor unit for a global currency (World Currency Unit). DEY should have a fixed exchange rate to which all other participating currencies could be fixed. Mundell reaffirms his theory of implementing a system with fixed exchange rates in his 2011 lecture “Currency Wars, Euro-Mania and the Price of Gold”. He refers to the Bretton-Woods-System – an international monetary management system with fixed exchange rates that established the U.S. dollar as common denominator to which each participating country fixed its currency. The U.S. dollar in turn was tied to gold at a fixed rate and was the only currency that would be freely convertible into gold. 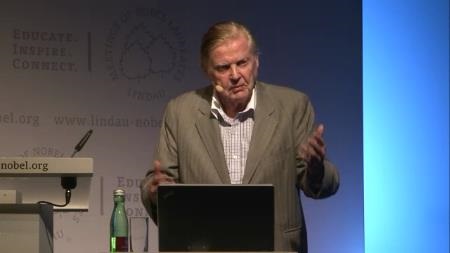 Robert Mundell (2011) - Currency Wars, Euro-Mania and the Price of Gold

Crisis as Chance? – The 2012 Nobel Peace Prize and Its Global Effects
Aside from economic reasoning, public actions of high symbolic relevance foster international solidarity and coherence. In 2012, the Nobel Peace Prize was awarded to the European Union – exactly at a time when the global financial crisis still had a firm hold on national economies: With a still high U.S. jobless rate of over 8 percent, with dramatic high youth unemployment rates of over 50 percent in southern European states such as Greece and Spain, with social unrest and the threat of disintegration, with talks of Greece’s expulsion from the Eurozone, the Nobel Peace Prize poses an unambiguous symbol of affirmation and encouragement to keep up fostering integration, solidarity and peace. Accordingly, the timing of the award doesn’t seem to be a coincidence. In its statement, the Nobel Peace Prize Committee emphasized the EU’s historical role in promoting peace and spreading democracy during the last decades:

“[F]or over six decades [the EU has] contributed to the advancement of peace and reconciliation, democracy and human rights in Europe”. [1]

In his opening speech at the 2011 Lindau meeting on Economic Sciences, Federal President Christian Wulff underscores the meaning of transatlantic relations between Europe and the U.S. Both countries share the same foundational values of peace, social justice and democracy as well as the fundamental objective of combining economic and social progress. Within the framework of a common value system, Wulff envisions a “global domestic policy” aiming to acknowledge mutual interdependencies and enforcing commonly defined goals. Since the European and U.S. financial and economic crises have dramatic effects on national economies especially in emergent and developing countries, Wulff refers to America’s and Europe’s exemplary role and calls on them to act responsibly by fostering long-term sustainable economic growth within the international context.

So far, both the U.S. and the European Union could prevent government shutdowns and live up to their principal cause of securing peace and unity within their borders. Coordinated fiscal support, coupled with EU-IMF-mandated austerity measures and severe federal budget cuts, is by far not sufficient to restore national economies, but pose a first initial step to make weakened economies able to act again. Will the U.S. and the European Union as key players of the world economy be able to set up a regulatory framework to enforce more responsible market behavior, thereby promoting sustainable growth of the real economy (Wulff)? Will the Eurozone’s wealthiest members be able to call on weaker states to embrace strict governmental measures, without risking popular unrest, conflict and national governments to fall apart? Will monetary authorities learn from their mistakes of the past by providing more transparency (Scholes) and by basing their calculations on more efficient analyzing tools – on a new paradigm, as Joseph Stiglitz calls for? And finally, will the U.S., Europe and China enter a global currency coalition by implementing a joint world currency unit (Mundell) to foster economic and financial stability? The future will show whether financial and governmental agents can take on new responsibilities to address effectively the major future challenges of economic and financial globalization.

Additional Lectures by the Nobel Laureates Associated with the Global Financial Crisis:
Robert Mundell 2004: The Case for a World Currency.
Joseph Stiglitz 2008: The Global Financial Crisis: Lessons for Policy and Implications for Economic Theory.
Myron Scholes 2008: The Role of Liquidity and Risk Transfer Services in the Economy.
Edmund Phelps 2008: The Good Life Needs an Economy of Dynamism - Originality, Novelty, and Challenge - and these depend on Attitudes as much as Institutions.
Roger B. Myerson 2011: Roger B. A Model of Moral-Hazard Credit Cycles.
Sir James Mirrlees 2011: Poverty, Inequality, and Food.
Christopher Pissarides 2011: The Future of Work in Europe.
Myron Scholes 2011: Quantitative Finance and the Intermediation Process.