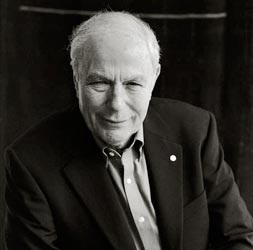 Nobel Prize in Chemistry in 2004 together with Aaron Ciechanover and Irwin Rose for “the discovery of ubiquitin-mediated protein degradation”.

In his Nobel biography, Avram Hershko notes that upon graduating from high school, he was interested in too many subjects to make up his mind as to what university studies he should pursue. He chose medicine, partly because his elder brother Chaim was already a medical student – a very rational reason for choosing a career – but early in his studies, the young Hershko “fell in love with biochemistry”.

Hershko was born Ferenc Herskó on December 31, 1937 in Karcag, Hungary. His family belonged to the small Jewish community of Karcag, where his father Moshe taught at the local school. The Second World War soon turned Hershko’s early childhood upside down. His father was taken away to the Russian front, where he would remain until 1946, unable to contact his family. During this time, Hershko and his mother and brother lived in the Karcag ghetto, and were then taken to a larger ghetto in the city of Szolnok. They spent the remaining years of the war in labour camps in Austria, narrowly escaping being transported to Auschwitz. Once reunited, the family made a new home in Budapest, but this was temporary, as they decided to emigrate to Jerusalem in 1950. They had to learn Hebrew and become accustomed to a different life in a country very different from Hungary. Eventually, Hershko’s father returned to teaching and became a well-known educator in Israel. The Hershko brothers were given a very good education in a private school, and went on to study at the Hadassah Medical School in Jerusalem, at that time the only medical school in Israel.

During his lecture at the 2011 Lindau Meeting, dedicated to Physiology and Medicine, Hershko presented several lessons he had learned during his scientific career. The first lesson was to recognise the importance of good mentors. Hershko’s first mentor in biochemistry was Jacob Mager, whose lab Hershko worked in during his year off from medical school. Hershko remembers Mager as a very knowledgeable and meticulous biochemist, interested in many different topics at once, and very particular about appropriate experimental methodology; all of these factors gave Hershko a strong background in biochemistry. Hershko joined the lab again after finishing his medical studies and after two years of compulsory military service, where he worked as a physician. He obtained his PhD degree in 1969. By this time, Hershko had a family of his own, having married Judith Leibowitz, a visiting researcher from Switzerland, in 1963.

Hershko’s introduction to intracellular protein degradation took place during a two year postdoc in Gordon Tomkins’ bustling lab at the Department of Biochemistry and Biophysics of the University of California in San Francisco. Tomkins was an inspirational, ever-curious scientist, who Hershko noted “never cared about controls, he cared about ideas.” Most researchers in the lab were working on various aspects of protein synthesis of tyrosine aminotransferase (TAT), an enzyme produced by the liver. Hershko was ready for a challenge, and so Tomkins encouraged him to study the degradation of TAT. It was found that the breakdown of TAT was a selective process and, as a reduction in ATP caused inactivation of the enzyme, energy was required for its degradation. This galvanised Hershko’s interest. Why is energy needed to degrade proteins? At the time, it was known that cells had mechanisms for degradation of abnormal proteins, which could be toxic to the organism. However, it appeared that normal proteins also underwent degradation into amino acids. During the early genetic revolution, when biochemists were mainly preoccupied with DNA structure and resulting protein synthesis, Hershko had found an often overlooked niche of biochemical research. As Hershko wrote in his Nobel Lecture, “this suggested that within cells a novel, as yet unknown proteolytic system exists, that presumably uses energy to attain the high selectivity of the degradation of cellular proteins.”

In 1969, the Rappaport Faculty of Medicine was established at the Israel Institute of Technology – the Technion – and within it, the Department of Biochemistry. Upon returning from the United States, Hershko was asked to become chairman of this department, which was so small that Hershko later recalled: “at the beginning I chaired mainly myself.” Gradually, Hershko set up his own laboratory group, which at different times also consisted of his wife Judy. In 1976, Aaron Ciechanover joined Hershko’s lab as a graduate student, later becoming Hershko’s co-recipient of the Nobel Prize. The lab’s main research focus was to form a cell-free system, recreating protein degradation, which could be analysed biochemically through fractionation and purification. This proved to be very challenging work. The group tried various approaches to achieve a cell-free system, working for several years in the old monastery building, which at the time was the seat of the Faculty of Medicine. Unfortunately, these experiments did not have a favourable outcome, yet Hershko was determined that it was possible to analyse protein breakdown in the test tube. In 1977, Etlinger and Goldberg from Harvard Medical School published a paper outlining a method of generating a cell-free, ATP-dependent proteolytic system from reticulocytes, a type of red blood cell synthesizing haemoglobin. Reticulocytes do not contain lysosomes, a component of cells responsible for hydrolysis. The paper demonstrated that the reticulocyte extracts quickly degraded abnormal proteins. Using this method, Hershko and his team were able to conduct new experiments, with the aim of fractioning, extracting and purifying the components of the cell-free system, which, as Hershko explained in Lindau in 2010, was a bit like putting apart a mechanical watch and then putting it back together again to see if it works.

For fractionation, Hershko recalled a method used in his graduate years in Mager’s lab, whereby anion-exchange diethylaminoethyl (DEAE)-cellulose resin was used to separate the reticulocyte lysates into two fractions – fraction 1, containing protein not adsorbed to the resin, which contained all the haemoglobin, and fraction 2, which only contained protein adsorbed to the resin and eluted. Neither fraction was active on its own, but when combined, protein degradation would take place. Further experiments showed that a small, heat-stable protein was present in fraction 1. These findings were published by Ciechanover, Yaacov Hod and Hershko in a small paper in the journal Biochemical and Biophysical Research Communications in 1978. Although only a five-page paper, it established the first important step towards elucidating the role of what is now known as ubiquitin, at the time named APF-1 by the group, for ATP-dependent Proteolysis Factor 1. This work was greatly encouraged by Irwin Rose, a specialist in enzyme mechanisms, in whose lab at the Fox Chase Cancer Center in Philadelphia Hershko spent his sabbatical year in 1977. In the coming years, Rose welcomed the collaboration with Hershko’s team, which spent several summers in Rose’s lab. The work at the Technion was also supported by grants from the National Institutes of Health.

Upon purification, APF-1 was found to markedly hydrolyse proteins in fraction 2 from reticulocytes in the presence of ATP. APF-1 became a high-molecular-weight molecule when incubated with fraction 2 and ATP. Surprisingly, APF-1 was linked to reticulocyte proteins with a covalent bond, which was determined by alkalising fraction 2. The resistance of the bond to heat denaturation was demonstrated as what Hershko called “smeary gels” in Lindau in 2011, describing the figure that was published in another short, but significant paper in 1980 (Ciechanover et al., 1980). In a subsequent paper, Hershko et al. (1980) suggested a sequence of events in ATP-dependent protein degradation, in which APF-1 bound covalently and reversibly to many types of proteins, and liberated APF-1 could be reused in the system. More than one APF-1 molecule could be linked to a single protein molecule; once the protein was labelled with APF-1, it was in a way destined for degradation. Several months later, Keith Wilkinson, a post-doc in Rose’s lab, and his colleagues published a paper establishing that APF-1 was ubiquitin, a protein made up of 76 amino acids, discovered by Gideon Goldstein five years earlier. It was found to exist in all eukaryotic cells, yet its function was unknown until that time.

In 1980, Hershko became professor at the Technion, and in the next 10 years he and his team, as well as other researchers, unravelled the unknowns of the ubiquitin-mediated proteolytic pathway. They demonstrated that ubiquitin is conjugated to proteins by the consecutive action of three enzymes; E1, a ubiquitin-activating enzyme, E2, the ubiquitin carrier protein, and E3, a ubiquitin-protein ligase, whose function is to link particular protein substrates. Proteins linked to polyubiquitin chains are then transported to a large ATP-dependent 26S proteasome complex, similar to a sack of enzymes, where they are broken down into peptides. By 1990, Hershko decided it was time to move away from model experiments carried out with reticulocytes, and look at the physiological significance of protein degradation, which is still a fast-evolving field of research. Since the early 1990s, Hershko has carried out research in protein degradation during mitosis, the last phase of the cell cycle, where the cell undergoes division. Specifically, his experiments have focused on the activity of the protein cyclin B, which is activated during the S phase of the cell cycle when DNA is replicated, and is quickly degraded at the end of mitosis. Since 1991, Hershko usually spends his summers conducting research at the Marine Biological Laboratory at Woods Hole, Massachusetts, which he appreciates for its creative and peaceful environment. The nearby coast is home to the north Atlantic surf clam, the fertilised eggs of which were used as a source of cell-free system. Experiments conducted on the enzymes isolated from clam egg extracts led to the discovery of the E3 ubiquitin ligase or Anaphase-Promoting Complex/cyclosome (APC/C), a complex active at the end of mitosis and involved in the breakdown of proteins that are fundamental to the cell cycle. As deviations in cell division cause cancer, this is a natural extension of many studies in cell cycle proteins.

In an interview with István Hargittai in 2004, Hershko admitted he wasn’t fully aware of the meaning of his discovery or the fast-paced scientific field it was to become, from ten papers published annually on ubiquitin to ten published in a single day. What started out as a neglected corner of biochemistry in the 1970s has become a critical area of research, branching out into the study of diseases as varied as Alzheimer’s disease, cystic fibrosis and cervical cancer. Hershko stated a few months before winning the Nobel Prize, “(Ubiquitin is) involved in almost everything because proteins are involved in almost everything.” In 2008, Velcade, a ubiquitin-proteasome inhibitor, was approved for the treatment of multiple myeloma, a bone marrow cancer.

Hershko is currently a Distinguished Professor at the Rappaport Faculty of Medicine at the Technion. He often advises scientists to choose interesting areas of research that have room to grow, and haven’t yet been “discovered” by others. Also, Hershko is an advocate of “good old-fashioned biochemistry” and benchwork, which is important for maintaining creativity in science.