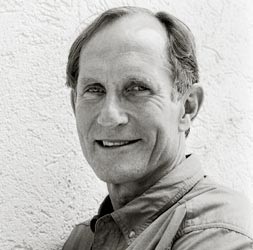 Nobel Prize in Chemistry 2003 with Roderick MacKinnon “for discoveries concerning channels in cell membranes”; Peter Agre received his share “for the discovery of water channels”.

“Prizes are nice, but doing something useful is more important”, said Peter Agre to his listeners during the 61st Lindau Nobel Laureate Meeting, in 2011. Doing something useful has undoubtedly been Agre’s priority in his scientific career; from his motivation to eradicate tropical diseases after travelling through Asia as a student, to many years devoted to clinical and biomedical research, to becoming director of the Johns Hopkins Malaria Research Institute, five years after winning the Nobel Prize.

A native of Minnesota, Agre was born on January 30, 1949, to parents of Norwegian-Swedish descent, the second of six children. His father Courtland Agre worked at the chemistry department at St Olaf College, later becoming professor at Augsburg College in Minneapolis. Agre credits his father for instilling in him an admiration for chemistry, and although he nearly escaped being expelled from high school for low grades (this came during a period of rebellion sparked by a camping trip to Russia), he eventually enrolled at Augsburg College to major in chemistry, with the aim of going to medical school. Agre was accepted to the Johns Hopkins medical school in 1970, and before classes began in the fall, embarked on a solo journey hitchhiking through Asia, which lasted several months. This memorable trip enhanced Agre’s interest in world health and disease, yet he found it difficult to concentrate on his studies in medical school after his return. This changed after Agre joined Pedro Cuatrecasas’s laboratory, where he worked on purifying the E. coli toxin, the cause of traveller’s diarrhea.

In 1975, Agre married Mary Macgill, a biologist, and together they moved to Cleveland, Ohio, where Agre completed clinical training at Case Western University Hospitals. Three years later, Agre accepted a clinical fellowship in haematology and oncology at the University of North Carolina at Chapel Hill, also working as a physician at an army hospital. Professor John C. Parker, a membrane physiologist, became Agre’s mentor at the university, and encouraged him to study erythrocyte, or red blood cell, membranes. Agre went on to collaborate with Vann Bennett, his friend from medical school, at the Wellcome Research Laboratories, where they worked on deficiencies of spectrin, a protein that binds to lipids in cell membranes. This work resulted in a paper, but also reinforced Agre’s enthusiasm for biomedical research. Agre returned to Johns Hopkins University in 1981 and began to set up his own lab at the Hematology Division. At first, he continued his work on spectrin deficiency with the help of a technician, Andrew Asimos, later moving on to study the Rh antigen, which was well-known in maternal-fetal incompatibility, yet had unknown molecular identities. A technologist, Barbara Smith, joined the team, and together they purified a 32 kDa membrane polypeptide from the erythrocytes using hydroxylapatite chromatography, and also another membrane polypeptide of 28 kDa. It was thought at first that this second polypeptide was a contaminant of the larger polypeptide. Both proteins were resistant to staining with Coomassie blue, which is a common method of visualising proteins, hence they were hard to detect. “Curiosity is a powerful force in science”, Agre said during his lecture in Lindau in 2011, and indeed curiosity provided the catalyst to identify this protein. Brad Denker, a postdoctoral fellow, joined the group and they soon found that there were copious amounts of the 28 kDa protein in erythrocyte membranes, which were comparable to proteins from animal, plant and bacterial cells. Agre spoke with other scientists, discussing the possibility that the protein could be a type of channel, but no one offered a solution. It was John Parker, who, during Agre’s brief visit to Chapel Hill, suggested that the protein could be a water channel, which had perplexed scientists for decades as to its molecular identity in cell membranes.

The lipid bilayer model of the cell membrane was established by Gorter and Grendel in 1925. In 1972, Singer and Nicolson proposed the fluid mosaic model, where the mainly fluid bilayer is made up of phospholipids with external hydrophobic heads and internal hydrophilic tails, protecting the internal components from the aqueous environment. Integral membrane proteins are randomly distributed in the bilayer. Studies on erythrocytes and toad urinary bladders indicated a higher rate of water permeability through such protein channels in membranes, whereas water transport in most cell membranes slowly diffuses through the phospholipid bilayer.

In 1991, Gregory Preston, a postdoctoral fellow in Agre’s lab, cloned the cDNA for the 28 kDa protein and found that the protein was indeed an integral membrane protein, which was a channel built from 269 amino acids. The protein was named CHIP28 (CHannel-forming Integral Protein of 28 kD). The group then contacted William Guggino from the Johns Hopkins Department of Physiology for help in expressing the protein in Xenopus laevis frog eggs, which were previously demonstrated as possessing low water permeability. Guggino had constructed a novel video-microscopy system for quantifying the expanded eggs in hypotonic solutions. The control eggs were injected with water, while the test eggs were injected with 2 ng of cRNA encoding protein. After three days of incubation, the eggs were transferred from isotonic solution to water, where all six test eggs expanded rapidly, signifying that they were highly permeable to water. This reaction was reversible, as demonstrated by injecting mercuric chloride, which is known to impede water transport. The resulting paper, which has since been cited nearly 2000 times, was published in Science in April 1992. Two months later, Agre and his colleagues teamed up with Mark Zeidel from Brigham and Women’s and Children’s Hospitals, Harvard Medical School, and with Suresh Ambudkar from Johns Hopkins Department of Physiology, to conduct experiments, where purified CHIP28 was imbedded into artificial liposomes, capsules made out of lipid bilayers. This experiment showed incontrovertibly that CHIP28 was responsible for water transport in red blood cells. The name aquaporin, abbreviated to AQP1, was coined soon after, and replaced CHIP28.

Agre joined the Department of Biological Chemistry at Johns Hopkins University in 1992 and became full professor in 1993. Although there was much to celebrate after the discovery of aquaporin itself, Agre and his co-workers collaborated with scientists from all over the world to identify the structure and detailed function of aquaporins, providing an insight into the movement of water across tissues. These joint efforts led to the publication of over 100 publications between 1994 and 2003.

The hourglass model of AQP1, established by Jung et al. at Johns Hopkins University in 1994, demonstrated that the protein is made up of four units with a central pore in each subunit, through which there is a single aqueous pathway. Several weeks later, two studies in collaboration with scientists at the University of Basel in Switzerland were published, in which the high resolution structure was defined using negative staining electron microscopy, atomic force microscopy and electron crystallography. These were the first two-dimensional crystallisation experiments of a protein water channel, as well as the first demonstration of high resolution structure of a human membrane channel. Later studies conducted by Murata et al. in 2000, a joint collaboration between Japanese, American and Swiss research institutes, led to an atomic model of AQP1. Important structural characteristics of AQP1 were defined, which determined its efficiency as a water channel: the small passageway measuring 3 Å at its narrowest point and the hydrophobicity of the pore surface, allowing a single water molecule to pass through, yet discouraging ion, solute and proton transfer (the latter which would lead to acidification, particularly important in kidney function, as kidneys reabsorb water but not excreted acid).

Since the discovery of AQP1 in the early 1990s, much research has been focused on determining various aquaporin isoforms and their functions, what is now often termed as the aquaporin superfamily. To date, 13 isoforms have been identified in mammals and many more in plants and bacteria. Classical (or orthodox) aquaporins are now known to constitute one branch of a larger group. They are highly permeable to water. Aquaglycerolporins are permeable to water, glycerol and small solutes. S-aquaporins are present only in animals, and the specifics of their permeability are still being determined.

Aquaporins are abundant in many different types of cells, with large amounts concentrated in the skin, brain, kidneys and lungs. Peter Agre refers to aquaporins as the “plumbing system for cells” (http://www.mediatheque.lindau-nobel.org/abstracts/29791/2006-aquaporin-water-channels-a-cellular-plumbing-system/laureate-agre), hence the study of various aquaporins leads to answers on fluid transport between cells. AQP2 is necessary for the proper function of kidneys, as it is essential for the concentration of urine in the collecting duct. Abnormalities in AQP2 function lead to often severe illnesses concerning water balance irregularities. AQP3 is a water and glycerol channel located mainly in the kidneys and outer layers of the skin. Recent studies have shown that AQP3 may control the migration of breast cancer cells through the regulation of hydrogen peroxide transport. Agre and his team, along with researchers from the University of Aarhus in Denmark, cloned AQP4, which is a key component of the blood brain barrier and also responsible for proper function of the retina, inner ear and olfactory system. Yet another aquaporin, AQP5, plays a significant role in the production of saliva, sweat and tears.

To meet the need of linking basic research with clinical aspects of medicine, Agre and Professor Thomas Pollard founded the Johns Hopkins Graduate Program in Cellular and Molecular Medicine (CMM). Besides research and teaching, Agre devotes much of his time to presenting his work around the world (he has participated in eight Lindau Nobel Laureate Meetings since winning the Nobel Prize in 2003). In 2008, Agre became director of the Johns Hopkins Malaria Research Institute and since then he spends a third of every year doing field work in malaria research in either Zambia or Zimbabwe. Agre has remained true to his years as a pre-medical student, when he aimed to fight the world’s most widespread and deadly diseases. Agre is also committed to bringing science to the public at home, where between 2009 and 2011, he served as President and Chair of the Board of Advisors of the American Association for the Advancement of Science. He also considered running for the 2008 U.S. Senate in Minnesota and was a science advisor to President Barack Obama. Of these contributions to science diplomacy, Agre has said, “(…) life is short; I think it’s very adventurous out there, and if we have an interest, we should at least consider pursuing those adventures”.

Nearly 14 years have passed since Agre has won the Nobel Prize, and he is still committed to creating solutions that may be useful to others, a motivation which he encourages young scientists to emulate. As Agre explained to Steve Mirsky in Lindau in 2011, “(…) it is going to take a lot of hard work by a lot of young people like the young scientists here in Lindau to look for opportunities where their wisdom and their hard work can lead to practical advances”. And while moving ahead in research, something worth remembering, “(…) you don’t have to be perfect to do something really useful in life”.