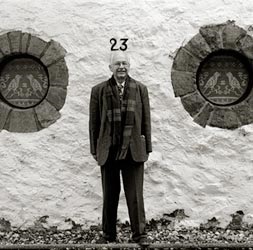 Reinhard Selten shared the 1994 economics prize with John Harsanyi (1920–2000) and John Nash (subject of the film A Beautiful Mind) “for their pioneering analysis of equilibria in the theory of non-cooperative games”. Game theory is a mathematical method for analysing strategic interaction – useful when a few parties in the same field need to consider the effect of their own and each other’s ‘moves’. It was introduced by John von Neumann and Oskar Morgenstern in 1944 and most theories involved situations in which the ‘players’ could cooperate for mutual benefit.

Nash made the distinction between these cooperative games and non-cooperative games, where agreements are not feasible, and developed an equilibrium concept for non-cooperative games. Selten refined the Nash equilibrium. He introduced the notion of perfection, the requirement that only credible threats should be taken into account when forming economic policy. Hungarian-American Harsanyi showed how games of incomplete information could be analysed – for situations where players do not know each others’ objectives.

Selten was born in Breslau, Germany (now Wroclaw, Poland) in 1930. His father was Jewish, and his mother protestant, and with the rise of the Nazis Reinhard was baptised. After the war, he attended high school in Melsungen from 1947–51, and then studied mathematics at Frankfurt from 1951–57. His master’s thesis was on cooperative game theory. This and his later PhD thesis opened his eyes to extensive games and the ‘perfectness’ problem which led to his prize-awarded work. After gaining his MSc in 1957, he went on to the University of Frankfurt am Main, where he received his PhD in mathematics in 1961.

That year he attended a game theory conference at Princeton (Nash’s ‘home’) and travelled on to Pittsburgh to meet Herbert Simon, whose work on bounded rationality Selten admired and emulated. Indeed, Selten is well known for his work in this area. In 1965 he attended a game theory workshop in Jerusalem where he met Harsanyi, starting a collaborative friendship that included working on projects for the US Arms Control and Disarmament Agency and forming a general theory of equilibrium selection in games, published in 1988. In 1969, Selten joined the Free University of Berlin as professor of economics until 1972 when he moved to the University of Bielefeld. He remained there until he was lured in 1984 to the University of Bonn by the prospect of funding for a computerised laboratory for experimental economics. Through a shared interest in the international language Esperanto Selten met his wife Elisabeth Langreiner. They married in 1959.


This text and the picture of the Nobel Laureate were taken from the book:
"NOBELS. Nobel Laureates photographed by Peter Badge"
(WILEY-VCH, 2008).