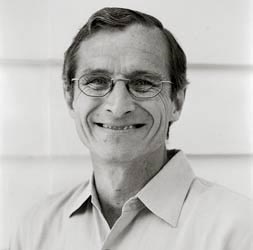 Richard Schrock shared the 2005 chemistry prize with fellow American Robert Grubbs and Yves Chauvin of France for ‘the development of the metathesis method in organic synthesis’. Metathesis (lit. ‘change-places’) is one of organic chemistry’s most important reactions. In metathesis reactions, bonds are broken and made between the carbon atoms that are the basis of all organic life, allowing atom groups to change places. This happens with the assistance of special catalyst molecules. In 1971 Yves Chauvin was able to explain in detail how metathesis reactions function and what types of metal compound act as catalysts in the reactions. Schrock was the first to produce, in 1990, an efficient metal-compound catalyst for metathesis. Two years later Grubbs developed a better, more stable, catalyst. Metathesis was already used, mainly for pharmaceuticals and plastics, but the trio’s work has made the process simpler, more efficient and more environmentally friendly. Their discoveries suggest fantastic opportunities for producing new molecules artificially through organic synthesis.

Richard Royce Schrock was born in Berne, Indiana, in 1945, but the family moved to San Diego, California, in 1959. He attended Mission Bay high school and went on to the University of California, Riverside to study chemistry, gaining a BA in 1967, and gained his PhD at Harvard in 1971. He then went to England for postdoctoral studies at the University of Cambridge with Lord Jack Lewis, and in 1972 he was hired by Du Pont Experimental Station in Wilmington, Delaware. At Du Pont, Schrock fi rst came across olefin metathesis, and began to consider the possibilities of a catalyst.

In 1975 he joined the faculty of the MIT, rising to full professor in 1980 and Frederick G Keyes Professor of Chemistry in 1989. With funding to build up a lab team, he had by 1980 shown what type of tungsten would metathesize olefis. By the mid 1980s he had developed catalysts for both the olefin and acetylene metathesis reactions. Supported by the National Institutes of Health, in 2003 he achieved the catalytic reduction of dinitrogen with protons and electrons at room temperature and pressure – a goal of many researchers for 40 years. Schrock is a member of the American Academy of Arts and Sciences and the National Academy of Sciences. He has published more than 400 papers and trained over 140 graduate and postdoctoral students. When he is not working he indulges in his lifelong hobby of woodworking. He married teacher and librarian Nancy Carlson in 1971 and they have two sons. 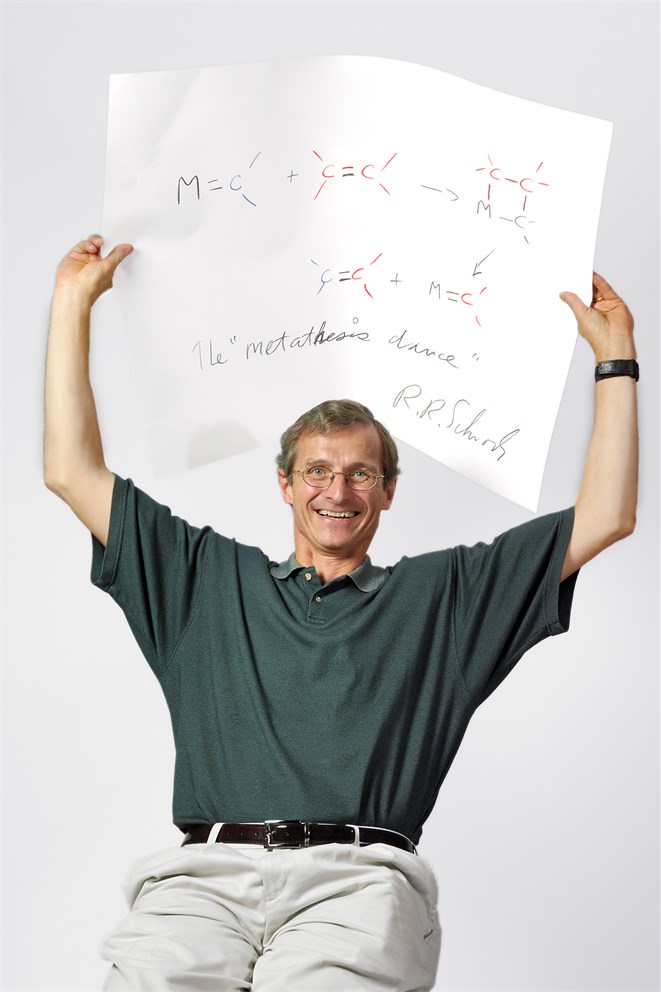 This is a tall, lanky MIT guy. He looks at my pencils and at me:
“You wanna do an art project?” He decides his work of art needs
an artsy title! He corrects his title three times before
giving up and breaking into laughter.
In the end he calls it “The Metathesis Dance”. Cool.

Take Your Partner by the Hand
by Adam Smith

Just like people, carbon atoms find that dancing together can lead to the formation of new and original couplings. Here, Richard Schrock, one of the developers of the new metathesis method for building organic molecules, has likened its central mechanism to a square dance. So grab a partner and follow along.

A metal (M) holds hands with a carbon atom (C), forming a double bond (those parallel blue lines top left). That couple collide with a pair of carbon atoms, also holding hands. They all reach out to form a ring, much like the square shown upper right. Then the metal drops the hand of its original partner (the blue C), and goes off holding hands with one of the new C’s (a red one), leaving the other red C and the blue one to pair off as well, and the couples float apart.

All this is happening very quickly, easily 20 times a second and perhaps as much as 100 times a second, the metal constantly swapping partners and building new connections amongst the carbon atoms without itself getting exhausted. The metal is a catalyst, able to do this 10,000 or even 100,000 times before being depleted, and thus works with extraordinary efficiency. Of course M isn’t just a lump of pure metal, but a metal with a bunch of other things stuck to it in order to make it soluble and therefore able to meet and bond with the carbon atoms in the organic molecules it is transforming. In Schrock’s case, the metals he used were molybdenum and tungsten, whereas Shrock’s co-Laureate Robert Grubbs used catalysts based on ruthenium, which although far less abundant gives catalysts of greater stability, with greater ease of handling.

When the Nobel Prize in Chemistry was awarded to Richard Schrock, Yves Chauvin and Robert Grubbs for their development of the metathesis method in 2005, very few people had heard of the reaction. But its renown and popularity is now increasing dramatically as people look for more efficient and economical ways to produce new chemicals, particularly biorenewables.