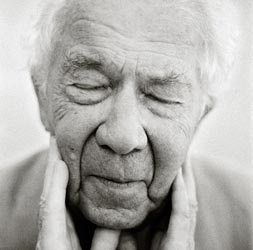 Nobel Prize in Physiology or Medicine in 1974 with Albert Claude and George E. Palade “for their discoveries concerning the structural and functional organization of the cell”.

De Duve titled his Nobel lecture “Exploring Cells with a Centrifuge”, and surprisingly, his discovery of lysosomes, an important organelle, or cell structure, responsible for hydrolytic activity, was made using mainly a centrifuge. His laboratory at the Catholic University of Louvain did not even contain a microscope, which is unimaginable in a biochemical lab today. The discovery of lysosomes was in a way accidental, and later confirmed by the then-novel electron microscopy in 1955. De Duve was only 38 years old at the time, but had been exposed to rigorous training in biochemistry in the finest research institutes of the field.

De Duve was born Christian Marie René Joseph de Duve on October 2, 1917 to Belgian-German parents, in Thames-Ditton, England. His parents had moved to England before he was born to escape the First World War and returned to Belgium in 1920, where they settled in Antwerp. De Duve remembers Antwerp as a very cosmopolitan, cultural city, home to the second largest port in the world at the time. It was here that he attended a Jesuit secondary school and perfected the use of four languages (his English and German speaking skills were further improved by visits of friends and family in both England and Germany). This became very useful for his future research career. De Duve was a brilliant student, but science was not a prime discipline at his school, which favoured a classical education based on Greek, Latin, philosophy and mathematics. Nevertheless, drawn by the romance of a medical career and the urge to serve society, de Duve entered the Medical School at the Catholic University of Louvain in 1934.

As de Duve later remembered, there was a lot of free time at medical school in those days, and the best students were encouraged to join a research lab in addition to their regular studies. De Duve joined the physiology laboratory of Professor J.P. Bouckaert, not because he was particularly interested in physiology, but because a friend of his belonged to the laboratory and it was located a short distance from his dormitory. Bouckaert’s group investigated the effect of insulin on glucose uptake, a topic which soon began to fascinate de Duve to the point where he decided to embark on a research career after graduating from medical school in 1941, although Bouckaert discouraged him on the grounds that he lacked the proper connections to succeed in research at a university. Bouckaert, however, was a key figure in de Duve’s developing perception of basic science. He believed that science should be motivated by curiosity, not by profitability or “usefulness”. De Duve wanted to further study biochemistry but such a discipline did not yet exist in Belgium and the Second World War stalled his plans to study abroad. De Duve was drafted into the Belgian army for a brief period as a medical officer, soon managing to escape from a prisoner-of-war camp and returned to Louvain. Until the end of the war, for the next four years, laboratory work was greatly limited due to lack of supplies, so de Duve enrolled in a chemistry course, graduating with the title of "Licencié en Sciences Chimiques" and also carried out a clinical internship at the Cancer Institute. Studies on insulin still motivated de Duve, and he conducted an extensive literature review on the subject. Under the tutelage of Professor Joseph Maisin, de Duve wrote a 400-page thesis on glucose, insulin and diabetes, for which he was awarded the degree of “Agrégé de l'Enseignement Supérieur”, the equivalent of a PhD. During this time, de Duve married Janine Herman, and welcomed the birth of his first son, Thierry, in 1944.

Soon after the war ended, de Duve travelled to the Medical Nobel Institute in Stockholm, where he spent 18 months in the lab of Hugo Theorell. Theorell was a Swedish scientist, who was awarded the Nobel Prize in Physiology or Medicine in 1955 for discovering the oxidation enzyme and its effects. The period in Theorell’s lab provided de Duve with valuable practical skills in enzymology. Afterwards, de Duve spent six months as a Rockefeller Foundation Fellow at Washington University, an institute renowned for research in carbohydrate metabolism. He worked with Carl and Gerty Cori, the husband-and-wife-team who went on to win the Nobel Prize in 1947 for the discovery of the catalytic conversion of glycogen, known today as the Cori cycle. The Coris had mentored five other future Nobel Laureates in addition to de Duve. One of them was Earl Sutherland, who collaborated with de Duve in St Louis, Missouri. Sutherland won the Nobel Prize in 1971 for the discovery of cyclic adenosine monophosphate (cAMP), an important promoter of glucose and fatty acid reserves. Sutherland and de Duve studied the effects of the contamination of insulin products with glucagon, then known as the H-G or hyperglycaemic-glycogenolytic factor. Glucagon is a pancreatic hormone just like insulin, yet its function is opposite to that of insulin, as it raises the level of glucose rather than lowering it. This was demonstrated by Kimball and Murlin in 1923, and they named the substance glucagon. For many years scientists worked on extracting and purifying the H-G factor in order to eliminate it from insulin preparations. The H-G factor was purified and crystallised by Staub et al. in 1953, and renamed glucagon by de Duve shortly afterwards.

In March 1947, de Duve returned to Louvain and set up his own research laboratory, also teaching physiological chemistry at the medical school. He became professor at the school in 1951. De Duve and his team of researchers continued his earlier research on insulin, and subsequently turned their attention to glucose-6-phosphatase, an enzyme found in the liver that is specific to glucose-6-phosphate, which is a phosphorylated glucose that is very abundant in cells. In 1949, the group set out to purify glucose-6-phosphatase from rat liver cells using the method of isopycnic, or differential centrifugation, a process based on subjecting the cells to increasing centrifuge forces to separate subcellular components. They demonstrated that glucose-6-phosphatase was mainly associated with the “microsomes” of a cell, a term Albert Claude used for granular, sedimentable cell structures, later known as the endoplasmic reticulum. As a control, de Duve and his research team wanted to assess the distribution of acid phosphatase, an enzyme with an acid pH optimum, found in most tissues. Acid phosphatase is a soluble enzyme and was expected to be found in the final supernatant, or in the liquid above the precipitated cell fractions, yet surprisingly, it was found in various cell fractions. The samples were left in the refrigerator over a weekend in order to re-examine them at a later time. Several days later, it was found that the activity of acid phosphatase had increased in all of the cell fractions. The low temperature had further broken up the cell components and de Duve correctly predicted that the acid phosphatase was a latent enzyme that must have been closed off from enzyme substrates in a type of membrane-coated sack and activated once this new type of organelle was broken up. It was an interesting detour from the main objective of their work and led the group to further examine this enzyme latency. They were never to return to their initial studies on insulin. It was demonstrated that four other acid hydrolases – β-glucuronidase, cathepsin D, ribonuclease, and DNAse – expressed the same behaviour as acid phosphatase. Using only biochemical methods, de Duve came to the conclusion that the new organelle was responsible for hydrolysing macromolecules in the cell, acting as the “stomach of the cell”. As electron microscopy was simultaneously becoming more developed, it was eventually used to visualise de Duve’s new organelle – the lysosome – in purified cell fragments by Alex Novikoff, a visiting scientist from the Albert Einstein College of Medicine in New York. The lysosome was officially discovered in 1955. A decade later, another organelle was identified by de Duve and his group: peroxisomes, which also belong to the microsome section of the cell. Similar to lysosomes, peroxisomes are essentially enzyme-containing vesicles, mainly responsible for oxidation and forming toxic peroxides as a result.

De Duve and his team further studied both lysosomes and peroxisomes, particularly with respect to diseases linked to the dysfunctions of these two organelles. In 1962, de Duve became professor at the Rockefeller Institute in New York and headed two research groups, in both Louvain and New York, both of which worked on similar projects. Several years later, in 1968, the bilingual Catholic University of Louvain was split into two universities, one Dutch-speaking and the other French-speaking, and de Duve moved with the French-language medical school to Brussels. In 1974, the year de Duve won the Nobel Prize in Physiology or Medicine, he created the International Institute of Cellular and Molecular Pathology (ICP) in Brussels, which was later, in 1997, renamed in his honour the De Duve Institute. De Duve retired from the University of Louvain and the Rockefeller University (formerly the Rockefeller Institute for Medical Research) in 1985 and 1988, respectively, and devoted much of his time to the ICP, where he served as administrator and fundraiser, remaining the founding member of the Board of Directors until his death. De Duve modelled the ICP on Rockefeller University, providing scientists with as much freedom as possible to conduct research. He was an enthusiast of basic research, believing that it may also lead to beneficial and lucrative applications. De Duve is still regarded as one of the most esteemed Belgian scientists, and was raised to the rank of Viscount by King Baudouin of Belgium in 1989, choosing the motto Per vivum ad verum (“from the living towards the truth”).

The last decades of de Duve’s life marked a period of prolific writing, during which he published several popular science books, such as “Vital Dust. The Origin and Evolution of Life on Earth”, “Life Evolving: Molecules, Mind and Meaning”, and “Blueprint for a Cell: the Nature and Origin of Life”. De Duve died on May 4, 2013 at his home in Nethen, Belgium at the age of 95, having decided to end his life after suffering from cancer and sustaining an injury after a fall.

De Duve was a keen participant of the Lindau Nobel Laureate Meetings, having attended six meetings between 1978 and 2011, and enjoyed meeting young scientists in an informal atmosphere, which he mentioned during an interview for the Alumni Association of the University of Louvain’s Medical School. Regarding attendance to future meetings during his last lecture in Lindau, de Duve said, “As long as I am physically able to come, I will come...because here is where we meet the young!”

Interview with the Alumni Association of the University of Louvain’s Medical School: http://www.md.ucl.ac.be/ama-ucl/AMA66-2-10.pdf