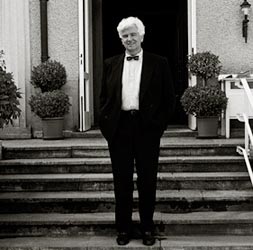 Günter Blobel is a German-born biologist who received the 1999 prize in physiology or medicine for his discovery that proteins have signals that govern their movement and position in the cell. An adult human comprises around 100,000 billion cells. Each cell contains several compartments, called organelles, which carry out different tasks. One of these is the constant production of proteins. Different proteins vary in size and function, from cell building to acting as catalysts for chemical reactions, and before Blobel’s discovery, scientists were puzzled how these proteins were transported across membranes to their correct destination.

Blobel was born in 1936, one of eight children of a wealthy family in Waltersdorf, Silesia, now part of Poland – the family had to flee the advancing Red Army in 1945, passing through Dresden just days before it was bombed. He lost his eldest sister, Ruth, to an air raid in April 1945. The surviving family settled in Freiberg, where Blobel’s father resumed his veterinarian practice. Günter finished school in 1954 but as a member of the ‘capitalist’ classes was barred from university in East Germany. Fortunately, travel to West Germany was not yet a problem, so he studied medicine first in Frankfurt and then in Kiel and München and graduated in 1960 from the University of Tübingen.

His elder brother Hans had moved to the US, and was a professor at the University of Wisconsin in Madison. Hans helped Günter secure a fellowship and in 1962 he joined his brother at Madison. He gained his PhD in oncology in 1966, and joined George Palade’s team at the Rockefeller University, New York. Palade had already studied the structure of the cell and the principles for the transport of proteins. This work earned him the Nobel Prize in 1974 (shared with Belgian scientists Albert Claude and Christian de Duve).

By 1980 Blobel had established the principles of ‘protein targeting’. Each protein carries an ‘address code’ of amino acids that specifies where the protein is needed, and acts as a passport to traverse an organelle membrane or the cell wall itself – membranes open a pore-like channel when a protein arrives with the correct code. His work shed light on several diseases and provided the basis for bioengineered drugs, including insulin. He continues to work at the Rockefeller University, but was also appointed to the Howard Hughes Medical Institute in 1986.

In 1994, Blobel founded the charity Friends of Dresden Inc, raising funds to help rebuild the city, particularly the Frauenkirche, which was completed in 2005, and a new synagogue. In memory of his sister Ruth he donated his Nobel Prize money to the project. He has also donated to the restoration of a baroque church in Fubine, ltaly, the home town of his wife Laura’s father, Sebastanio Maioglio.